“It was done in the dark of night,” Mullholland said.

Each election year, Arlington Dems put up signs in street medians 31 days before the contest, which is allowed under state and Arlington law. Last night, signs the organization placed on medians along Sycamore Street between Williamsburg Circle and Lee Highway, and on Little Falls Road at Lexington Street were either destroyed or vandalized. (Photos below. High-resolution versions available on request.)

“We always get a certain amount of vandalism, but the vandals are off to a fast and aggressive start this year,” Caiazzo wrote in an email to the Arlington Police Department reporting the crimes. At Little Falls Road, “It looks like someone actually drove onto the median in order to run over the signs,” Caiazzo reported. Arlington Dems understand the police department has more urgent issues to address, but wanted to document the destruction, she added.

“I had to staple it back together,” Mullholland said of a “Dump Trump” sign on her lawn that was pulled off its stand in the yard of her Barcroft home and ripped apart. Another sign supporting the Biden-Kamala Harris Democratic ticket was damaged beyond repair, she added. Arlington Democrats learned of the destruction when Mulholland contacted the organization to request new signs, which are back in front of her home. 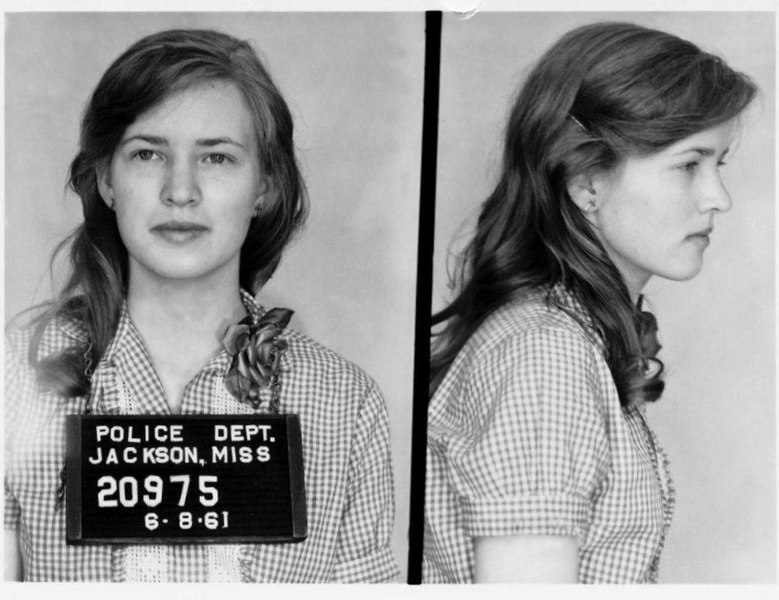 Mulholland 79, is an Arlington native known for taking part in sit-ins, being the first white person to integrate the historically Black Tougaloo College in Jackson Miss., and to become the first white member of the historically black Delta Sigma Theta sorority. She was held on death row in Mississippi’s notorious Parchman Penitentiary in 1961 for her civil rights activities. The National Museum of African American History & Culture in Washington, D.C., includes a small exhibit about her.

“It was done in the dark of night,” Mulholland said. “History repeats itself. Black Lives Matters is a grander reincarnation of the civil rights movement and Trump supporters are just the new version of [Ku Klux] Klan sympathizers. “It’s just a shame that it’s coming from the top,” Mulholland added, referring to Trump’s racist rhetoric.

Arlington Democrats has replaced the signs and will continue to place them throughout Arlington. “We won’t be deterred by the illegal behavior of a few troublemakers,” Caiazzo said. "We call on Democratic voters in Arlington and across the country to stand up to these intimidation tactics by voting early in-person this week, wherever possible."

Roses are red, Democracy is blue – we want to celebrate Valentine’s Day with you!  Join us for our Valentine’s Day Happy Hour on February 16th at Matchbox Restaurants in Pentagon City.
View Calendar